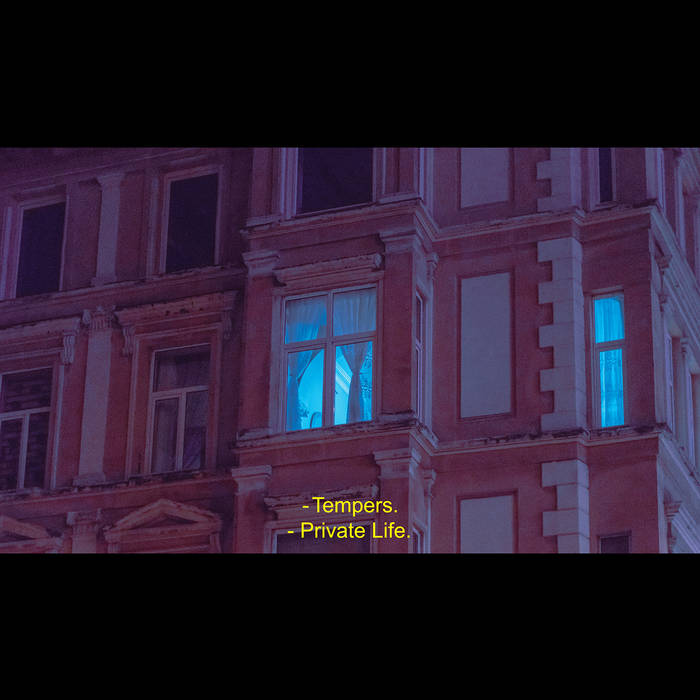 takogami Every song on this album is incredible. I can't pick a favorite track!

rikm Languid, dreamy, and absolutely beautiful, "Private Life" finds Tempers taking listeners on a fantastic musical journey through shoegaze-y goodness inviting us to get lost with them in a kaleidoscope of wonders.

In Defence of Douglas

In Defence of Douglas Compellingly gloomy, this IS dance music for the metaphysically deceased. I feel as though I have been granted a glimpse, just a glimpse, of the structures behind the structures. There was only vapour... Favorite track: More Than You Realized.

Kristian R. Postmodern musique noir. Tempers never ceased to amaze me, ever since listening to Strange Harvest for the first time, and "Private Life" just continues to do so. A dark, nuanced, at times gloomy trip to their and your lifes, to dimly lit rooms and restless, confused dreams. Favorite track: Peace of Mind.

New York based duo Tempers, comprised of Jasmine Golestaneh and Eddie Cooper, have been diligently carving out their own unique niche within dark indie, electronica and synth-pop circles since their formation. After a series of digital singles in 2013, Tempers began solidifying their singular identity of rigorous electronic production blended with instinctual, unleashed vocals. Following well received tours in Europe and the United States, Tempers saw the release of their debut album entitled Services, released in Germany via the highly regarded cult imprint Aufnahme + Wiedergabe and quickly became a staple in the synth-pop/post punk scenes in both the States and in Europe. Since the release of Services, Tempers have regularly appeared at a number of international festivals and venues, including Test Pressing Festival and Berghain to name a few, and ambitiously created a concept album entitled Junkspace in 2018, in collaboration with famed architect Rem Koolhaas, about the deconstructed banality and overlooked grace of 20th century shopping mall culture.

Tempers third full-length album, Private Life, successfully progresses their cinematic aesthetic into a moodier and more introspective landscape. Private Life opens with “Capital Pains”, a lonely incantation that echoes the human desire to envy other people’s lives and endlessly chase our own insecurities. Surreal, isolated atmosphere backed by upbeat rhythm and melancholy refrain projected from “Capital Pains” perfectly set the tone expectation for Private Life. “Peace of Mind” crawls along as a dramatic dirge with Golestaneh imparting matters of loneliness and solitude, always looking from the outside and complemented with Cooper’s haunting resonance.

The character behind songs such as “Sleep” and “Push/Pull” break from Tempers signature synth-laden post punk notoriety, instead switching to a more somber songwriting style that settles down between downtempo dream pop and despondent soundtracks. Behind the backdrop of driving electronics and magnetic verse, Private Life deconstructs and reimagines the ideas behind despair, love, loneliness, and hope. While most people would simply reflect on nostalgia, Tempers stands alone in their unique methods, fictionalizing their ideas through sound and vision to create soundtracks for everyday affliction.

Bandcamp Daily  your guide to the world of Bandcamp